In accordance with Federal civil rights law and U.S. Department of Agriculture (USDA) civil rights regulations and policies, the USDA, its Agencies, offices, and employees, and institutions participating in or administering USDA programs are prohibited from discriminating based on race, color, national origin, sex, disability, age or reprisal or retaliation for prior civil rights activity in any program or activity conducted or funded by USDA. Persons with disabilities who require alternative means of communication for program information (e.g. Braille, large print, audiotape, American Sign Language, etc.) should contact the Agency (State or Local) where they apply for benefits. Individuals who are deaf, hard of hearing or have speech disabilities may contact USDA through the Federal Relay Service at (800) 877-8339. Additionally, program information may be made available in other languages other than English. To file a program complaint of discrimination, complete the USDA Program Discrimination Form (AD-3027) found online at http://www.ascr.usda.gov/complaint filing cust.html and at any USDA office, or write a letter addressed to USDA and provide in the letter all of the information requested in the form. To request a copy of the complaint form call (866) 632-9992. Submit your complete form or letter to USDA by (1) Mail: US Department of Agriculture Office of the Assistant Secretary for Civil Right 1400 Independence Ave, SW Washington, D.C. 20250-9410 (2) Fax: (202) 690-7442 or (3) email: program.intake@usda.gov This institution is an equal opportunity provider.
Placeholder text, please change 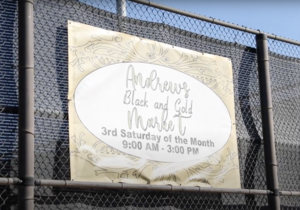 This is the first time AMS has won first place at the international level in the junior division.

They competed at the affiliate level in late February and was one of two junior teams selected to move onto internationals. The group competed against 12 other teams, including five from countries across the world.

The sixth grade FPS team decided to create a monthly farmers market to help the Andrews community impacted by COVID-19 and the oil industry crisis. During their research, the team looked at other small towns that had monthly farmers markets. They created a list of rules and regulations as well as a waiver for the vendors. The team surveyed Andrews residents to see if there was interest in a farmers market.

The group of 6th graders took their idea to the mayor and city council for approval. Eventually, they had 25 vendors sign up to sell their products.

A couple from the community has taken over the Black & Gold Market to continue the event every month.